App: Your Own File in Self Evident

The?Self Evident app?is an example of an app that shows how citizens can create their own criminal investigation file, starting at the crime scene. It enables you to record, validate and secure the evidence. Either as a witness or victim you can create photos or videos, add a sound recording of an witness report and plot relevant facts on a map. All of these features are now at the fingertips of any citizen and you can share the whole case file with the police with just the click of a button.? 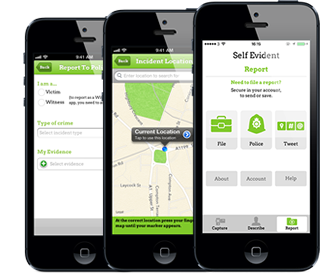 There are hundreds of thousands of crime offenses that don’t get reported. Several reasons explain why, but the hassle of going to a police station or the burden of a long phone conversation are some of them. And because crime solving rates are low (some of the crimes have rates below 10%) the motivation to report a crime isn’t what it could be. But we do know that if citizens can work together with the police, the solving rates increase dramatically. Research shows 80% of crimes are solved by means of citizen participation and catching criminals has highest probability if the information is shared in the first couple of minutes (catching criminals in the act). The time was right to create an app that did just that: enable citizens to share rich information in a very fast and easy way to enable effective and efficient law enforcement activities.

The mini evidence file of your case is stored securely in the cloud (justevidence.org) and a co creation proces enables working together with the police to solve the crime. You can always add information as you remember some details or as you receve new information from an eye witness. But you can also share (parts) of the case file with your ensurance company. An eye witness report that was recorded could even be used in court, because the audio file can simply be played back. It then plays the exact things as the witness reprted it, instead of an officer typing in the report minutes or even hours later with risks of errors and ommisions. The app also has social media features to share some incident information and ask other people to report tips.

The app enables citizens to see whether the case file is opened or updated by the police. Citizens could even plot scenario’s themselves on how they think the perpetrator got away or add any other clues if they start to remember things later. There’s also a feature of providing feedback, to let the police know how you think they handled the case and helped you out. Any crime can be reported, but in case of an emergency people should still call 112 (EU) or 911 (US), using the big red button in the app.

Self Evidence is provided by a private party, and although it’s a free app it is limited to storing files (60MB). For more a small fee has to be paid. The service is dependant on donations of citizens, but also reliant on donations of the Allen Lane Foundation, the Robert Peel Trust?fund and the police. But eye witness reports or case files created by victims of crime that are shared with the police are (at least in the UK) free of charge. Any income that is gathered through police cases will be transfered to funds against crime related to the area of the crime scene through the Robert Peel Trust?fund. Users of the service can create extra case files using their PayPal or creditcards to safely store their files ‘in the evidence cloud’.