12 hours of total lawlessness to keep crime figures low in the rest of the year. That’s what the The?Purge (purification) allows you to do. Almost everything goes, from murder, theft?and rape, and without persecution. This phenomenon was put down in a movie last year and part two of the movie is released this summer. It has become a meme that is exerted on the internet.

Many teens think it’s ?good idea to go online for 12 hours themselves after seeing the movie, just for fun. To some this a lot more innocent than in real life, but is that the truth? Online very bold or downright obscene pictures are posted in purges, and very?hurtful?comments follow (trolling). And unfortunately some actions have consequences in the real world. Social platforms such as?Facebook and others are obviously trying to do somtehing about this type of behaviour. ?Like?the “Purge KC” Facebook page which has now removed because minors were?sexting?(posting nude photos of themselves or others, that could be used in revenge porn too). One teenager from Santa Clarita Valley, San Francisco made ??several Twitter accounts and used the hashtag #twitterpurge to deliver the ‘anything-goes’ -meme onto her followers.

Twitter is trying to do something about it and remove accounts, also because pictures of minors fall under the child pornography legislation. They also scan, for example, for words like?”thots” (a slang word for “slut”) and when nude photos are commented and retweeted. But in practice it does not stop at one channel: it quickly spreads to Facebook or Instagram. 11 American states now have made sexting illegal, while Canada, Brazil and Japan ar looking into it. In the UK however new laws are not foreseen, but discussions about it are all around in?(traditional and social) media. The TwitterPurge took several turns, but luckily there were many young people who responded and tried to stop it:

?It?s disturbing to see,? that mother said in an interview Thursday. ?You know, it?s also disturbing that there’s not parents monitoring their children’s social media activity.??

Police contacted the girl?s parents and the photo was removed. A Shawnee, Kan., police official said the girl would not be charged with any crime. She was guilty only of poor judgment.

Meanwhile, with the film set to debut in many cities at midnight Thursday, #PurgeNight and similar hashtags are flooding Instagram with photos, and accounts like KCPurge are posting obscene photos to thousands of followers.?Neither Universal Pictures nor Blumhouse Productions, who produce the ?Purge? films, responded to request for comment on Thursday.

?This is on the Internet. It?s in ink. It?s not in pencil. You can’t erase it,? the Johnson County mother warned. ?Once it?s out there, it?s out there.? 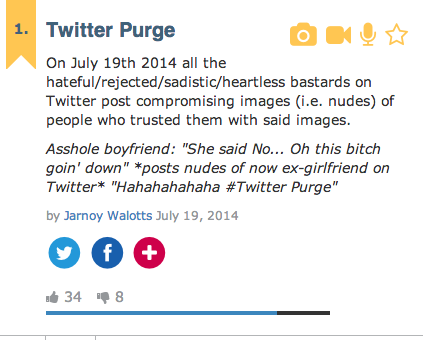