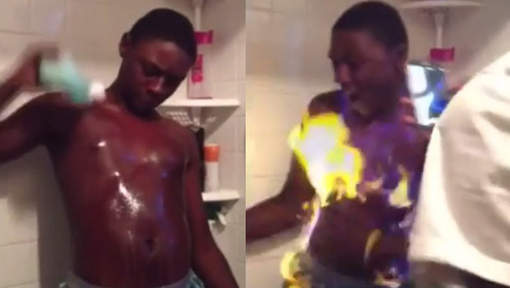 After memes such as neknominaties‘,?checknominating?and ‘wet suit” a new nomination meme has come to town. Hundreds of young people set themselves on fire and put the images onto social media, in the game?of gaining fame. Playing with fire, literally and figuratively. The #FireChallenge already caused dozens of young people to end up in the hospital A mother was even arrested when she helped her son create?such a movie.

“The craze is not new, but has expaned enormously in?the last week,” says the site Daily Dot. On YouTube, Vine and Instagram you can find many crazy people in such videos. And?it’s no surprise that it does not always end?well. In Lexington, in the state of Kentucky, a 15-year-old boy ran second degree burns after he had smeared alcohol on his chest and had put himself to fire. Neither he nor his friends managed to extinguish the fire, even though he was in the shower. “I was not really in my right mind when I did it,” the guy explained to?WKYT-TV.

The Hospital of the University of Kansas told KCTV5 that every week a dozen burnt patients come in as a result of the new craze. “Here they mainly put their legs on fire, resulting in third degree burns after which we have to perform skin transplants,” stated Dr. Dhaval Bhasvar. “Those people are not aware of the possible consequences. This goes beyond a joke on YouTube, it can result in permanent injury, “says the fire department of Overland Park in Kansas. Many fire departments have?thus started?a counter movement online with campaigns to stop this madness.

Hey kids/#teens, the #FireChallenge is an incredibly stupid thing to do. Fire burns. Don’t be an idiot. pic.twitter.com/ceVEXUTLbm