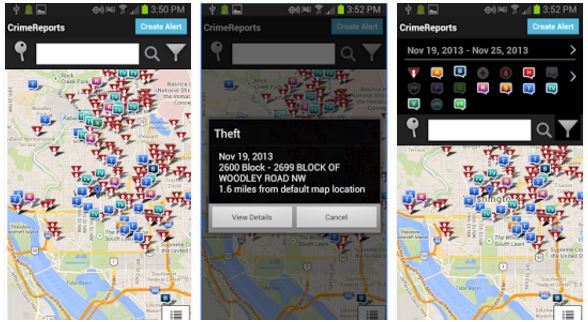 Police Chief Thomas Wydra is looking to both the past and the future as a way to help combat crime.

The past comes in the form of an app that shows what crime has occurred and where it happened. The future is a prediction, with software Wydra terms as ?cutting-edge,? that can help the department predict where problems will pop up.

Two months ago, the Police Department went online with the CrimeReports app that maps out where crime has occurred. The town is one of only a handful of municipalities in the state using the app, which is free to download and lets residents see what crime is happening in their neighborhoods shortly after it happens.

?This is a crime-mapping solution that is the most popular in the world,? Wydra said. ?The fact is, we want to be as transparent as possible and we want our public ? our stakeholders ? to be well-informed as much as possible. This app allows us to do that, and it allows the public to consume information on their own without having to contact us for it, so it?s clearly more available to the public at large. Knowledge is power and people have a right to know to some extent what is going on in their neighborhoods.?

CrimeReports (Android)?boasts itself as the ?largest, most comprehensive crime-mapping website in the world,? according to its website. There are more than 700 police agencies across the country that utilize it, although only a handful in Connecticut, including Trumbull, Darien, Stratford and Westport.

?The CrimeReports app is a tool our residents can use to keep us informed,? Mayor Curt Balzano Leng said. ?Much like a block watch on your phone or tablet, you can see what activities have occurred in your area in almost real time. It helps us stay informed, keep an eye out for unusual activity to report to the police, keep our neighbors informed and watch out for each other.?

After logging on to the app, it will detect your location and show crimes that have occurred in that area. For most of Connecticut, all that is seen are little red pins denoting the locations of people on the state?s Sex Offender Registry. However, in the towns that participate, there also will be different color pins, and when clicked will pop up with information about what crime has occurred there and when it occurred.

So far, reaction from residents has been good, Wydra said.

?I?ve had a few people make comments to me about it and they were very positive,? he said.

The information is uploaded to the app once or twice a day, Wydra said.

?There is some delay ? it may be six or eight hours ? because the fact is that it would be disadvantageous to us and perhaps unsafe if that information were available in real time,? he said. ?We would be giving away the locations of our personnel in real time, strategically speaking and from a safety perspective that would not be smart.?

There?s only about 30 days worth of information shown on the map, but more is available, he said.

?We haven?t set time up there, but there?s a search feature in the app so you can search beyond what is available in terms of when you access the crime reports app,? he said.

It?s not costing the town anything, Wydra said.

While it?s good to have that information available to residents, it?s better not to have any incidents to report, Wydra said. To that end, the town is investing in a software program called Predictive Policing, expected to cost about $38,000, that uses processes similar to business analytics to help predict where and when crimes are likely to happen.

?CrimeReports is about crime mapping that tells us where we have been,? Wydra said. ?What we are on the verge of buying is predictive policing software which will tell us where to go.?

Predictive policing software uses a number of variables to predict future events and helps departments plan where to place its resources, Wydra said.

?It will use historical data on dates and crimes, and it includes weather because as we know, weather is a big impact on crime and in the Northeast, we have multiple seasons that play a role,? he said. ?So, we will be using that weather data plus weather predictions to assist us in deploying our personnel. It?s cutting edge and we are going to be doing that in the next couple of months?.

The town just went out for a request for proposals for the software, he said.

?We have four vendors that submitted proposals. At some point in the next month or so, we will be selecting one of those vendors,? he said. ?It?s cutting-edge technology and it?s not that common in the Northeast. We will be one of the first departments in New England ? if not the first ? to be using a predictive policing software solution. I?m so excited about it. In the next month we will select a vendor and in the few months after that we will roll it out.?

Mayor Curt Leng said, ?The policing package requests for proposals are in but the panel has not even begun reviewing them. The program and cost will change depending on what we select and how many years ? so it?s really too early to tell? what the final cost will be.

?The software in review in Hamden,? Leng said, ?would be the first on the forefront of 21st policing,? he said.