Yelp is an American corporation headquartered in San Francisco, California. It develops, hosts and markets Yelp.com and the Yelp mobile app, which publish crowd-sourced reviews about local businesses, as well as the online reservation service SeatMe and online food-delivery service Eat24. The company also trains small businesses in how to respond to reviews, hosts social events for reviewers, and provides data about businesses, including health inspection scores.

Yelp grew quickly and raised several rounds of funding. By 2010 it had $30 million in revenues and the website had published more than 4.5 million crowd-sourced reviews. From 2009?2012, Yelp expanded throughout Europe and Asia. In 2009 it entered several negotiations with Google for a potential acquisition. Yelp became a public company in March 2012 and became profitable for the first time two years later. As of 2014, Yelp.com has 135 million monthly visitors and 71 million reviews. The company’s revenues come from businesses advertising.

According to BusinessWeek, Yelp has a complicated relationship with small businesses. Criticism regarding Yelp focus on the legitimacy of reviews, public statements of Yelp manipulating and blocking reviews in order to increase ad spending, as well as concerns regarding the privacy of reviewers.

Below an example of the role of Yelp in a criminal investigations case that became a popular TV documentary on Netflix:?Making a Murderer. 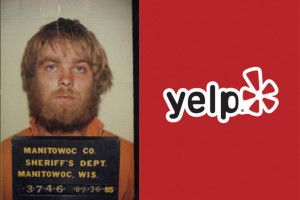 For those of you questioning the justice system after Netflix?s Making a Murderer, get ready to feel the sweet relief of (non-violent!) online vigilante justice. Buzzfeed News reports that viewers of the Netflix series have been leaving Yelp reviews on the Yelp page of district attorney Ken Kratz, the man who prosecuted the main subject of the series. And let me tell you, it?s not pretty. 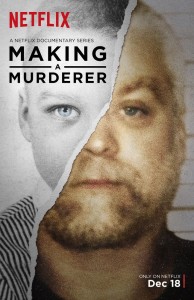 For those of you who haven?t been inspired to watch yet by Alec Baldwin, this Netflix true crime documentary series follows Steven Avery, a Wisconsin man who was wrongfully convicted for sexual assault in 1985. After serving 18 years in prison, the 10-part series follows Avery after he?was?exonerated from his crime in 2003 after new DNA linked someone else to the assault. Much like the true crime podcast sensation before it, Serial, there are lots of twists and turns and key plot points that don?t quite add up. However, it?s the justice system behind the investigation that is on trial in this series, not Avery. In 2005, Avery was sent back to jail and sentenced to life in prison after being charged with murdering a photographer. However, the series and its viewers question whether or not the evidence that was used to convict Avery for murder was actually planted by law enforcement.

Enter Ken Kratz?s Yelp page. Enraged fans have taken to the reviewing site to express their disgust with Kratz. Currently ranked at 1.5 stars, several reviews are disgusted and upfront: 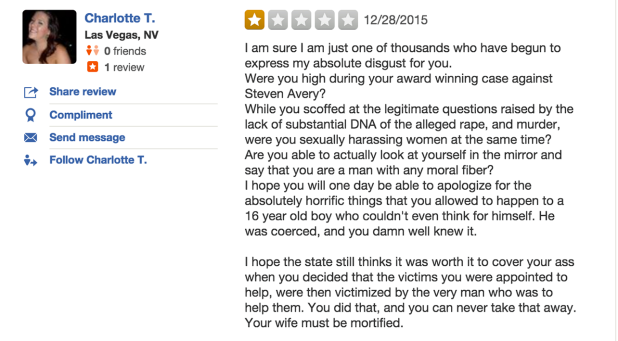 Other reviews take a more mocking approach, even sarcastically awarding the firm a 5-star ranking: 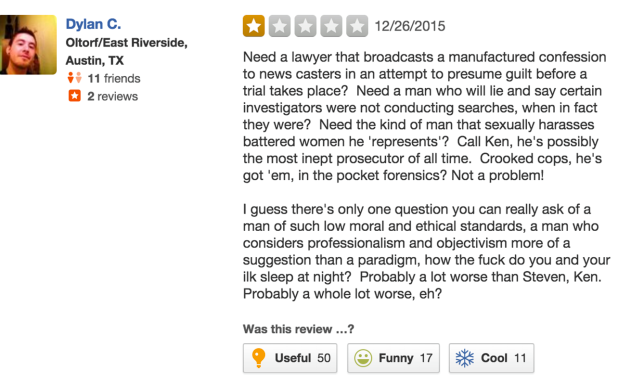 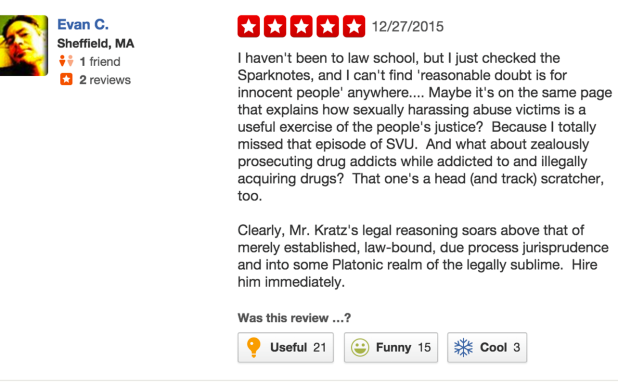 Some reviewers even reference Kratz?s resignation, which came from a scandal involving sexually explicit text messages that Kratz sent to a domestic abuse victim. As the icing on the horrible cake, Kratz was the prosecutor for the victim?s case.

Kratz has claimed that Making a Murderer?s filmmakers did not give him the opportunity to respond to claims made?about him. According to BuzzFeed News, Kratz has received ?several hundred emails and tweets? about Steve Avery?s case. However, these allegations have done little to silence the onslaught of negative Yelp reviews: 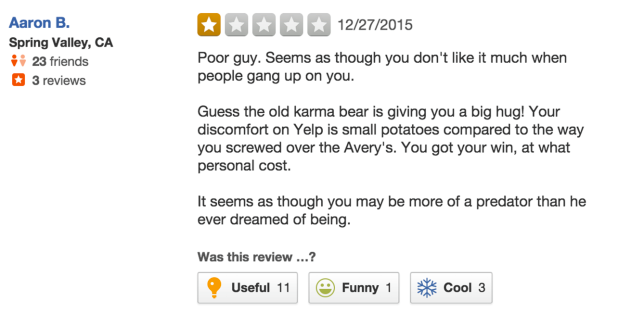 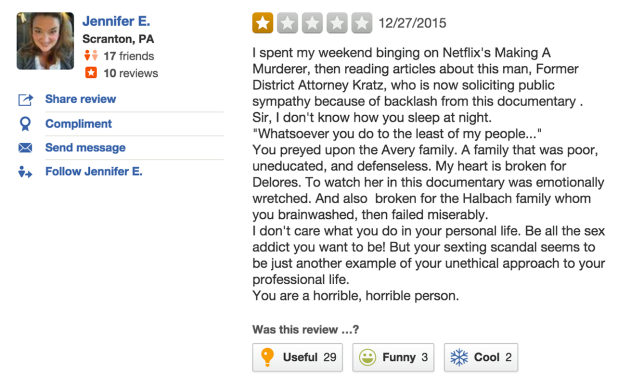 Though this documentary series premiered on December 18, the residual social media attention has proved that there will be a long tail on this true crime story. As satisfying as this social media outburst is, Kratz has claimed that while most of the posts and attention are merely insulting, some of it is threatening to him and his family. What do you think? Is this social media justice at its finest, or?are fans crossing the?line?