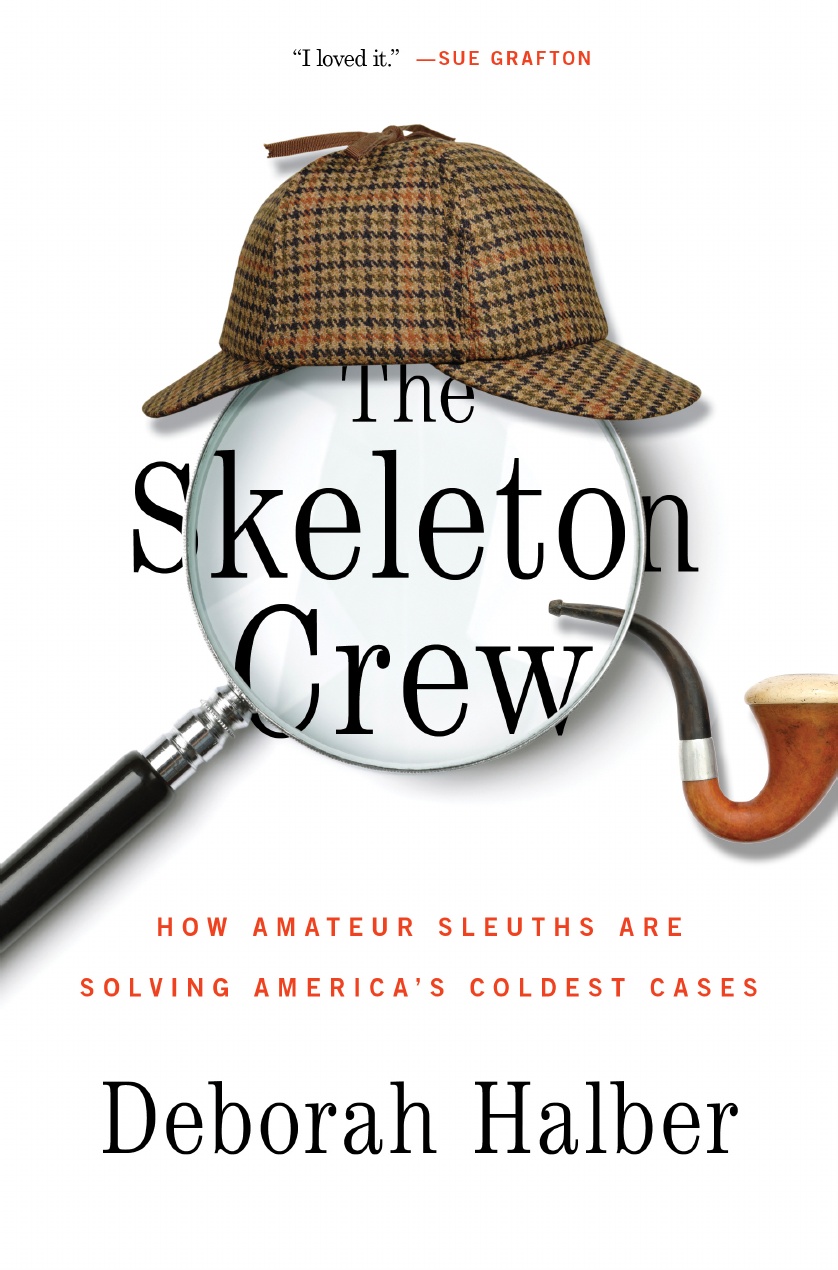 The idealistic notion of an army of smart volunteers taking to the Internet to help solve crimes suffered a serious knock last year. That?s when cocky amateur detectives at Reddit.com took it upon themselves to scrutinize photos snapped just before the Boston Marathon bombing in search of likely ?suspects.? Crowd shots were posted to the Web, complete with incriminating circles and arrows pointing to innocent spectators, many of whom just happened to have brown skin. When the FBI released closed-circuit camera images of the actual perpetrators (neither of whom had been fingered by the Redditors), some site members then went on to argue that one of the suspects was Sunil Tripathi, a missing college student later found drowned in Rhode Island. It was a clueless, hurtful and potentially dangerous performance that did not bode well for the future of crowdsourced law enforcement.

Let Deborah Halber?s ?The Skeleton Crew: How Amateur Sleuths Are Solving America?s Coldest Cases? stand as a partial corrective to the hubris of the Redditors. Halber, a science writer, recounts how a motley band of committed hobbyists have devoted countless unpaid hours to linking unidentified human remains with missing-person reports. The case that serves as her framing device ? ?Tent Girl,? a young woman whose body was discovered wrapped in a striped tarpaulin off Route 25 in Scott County, Kentucky ? was 30 years cold when a factory worker named Todd Matthews matched her to a listing posted by a woman in search of her long-lost sister.

Matthews solved that one all the way back in 1998, when the Web was young. As Halber reveals, listings of missing persons and unidentified bodies were among the first things average citizens wanted to put on the Internet. It turns out there are a lotof unidentified bodies out there. No one can say for sure how many because real-life law enforcement organizations are much less proficient at collecting and sharing information than the ones on TV.

Sometimes, a corpse (or portion of a corpse) is found in a jurisdiction where it will get ?a thorough going-over: measured and weighed; gender, race and approximate age determined; hair and eye color, if hair or eyes remain, noted; scars, tattoos and old injuries inventoried.? A few counties over, the remains might be incompletely assessed and stuffed in a corner or summarily cremated and buried to save space. When a national survey of anonymous remains was made in 2004, some agencies actually found human bones stashed in cardboard banker?s boxes. Still other coroners ? mostly the elected, small-town variety, mistrustful of federal authority ? refused to respond to the survey at all. One reasonable estimate is that authorities have collected about 40,000 remains that have not been identified.

Some of these cases are famous, with their own Web pages and Wikipedia entries; among them is the Lady of the Dunes, a young woman found, murdered and missing her hands, in a secluded grove off a beach in Provincetown, Massachusetts, in 1974. (Halber describes her own efforts to solve that notoriously perplexing mystery with the help of a Boston police dispatcher who moonlights as a missing/unidentified researcher. She found it mind-numbing to sift through the missing-person reports and redoubled her admiration for his patience.) Other cases are less mediagenic: for example, the death of a middle-aged homeless person from natural causes. Yet the latter often leave behind parents, spouses, siblings and children who are still wondering where they are and what happened to them. ?We don?t like to think that public agencies would abandon cases that prove too challenging,? Halber writes, ?but ? confronted with more immediate concerns than a quietly decomposing body ? they often do.?

The sleuths themselves are as fascinating as the mysteries. Matthews ? whose track record of solving cases eventually led to a position as communications director for the Missing and Unidentified Persons System, or NamUs, a clearing house established by the Department of Justice ? was coping with a bad heart and living in a trailer when he became obsessed with Tent Girl. Another member of the Skeleton Crew is a scrappy North Carolina mom who cares for a 6-year-old son with Down syndrome by day and exercises an uncanny knack for coaxing useful information out of the Internet by night. Yet another woman has an extraordinary visual memory that enables her to retain and compare hundreds of photos and reconstructions of faces.

Halber interviewed most of her sources in diners, boarding houses, tidy working-class suburbs and homes along sleepy country roads with rusted appliances and broken furniture piled out front. What she found were people whose talents might otherwise have gone untapped. Ellen Leach, ?one of the most effective sleuths out there, with at least five ?solves? under her belt,? came from a family that could not pay for higher education. She worked at a supermarket steam table serving prepared foods for more than 20 years and, like most of her fellow amateurs, had to make do with outdated and unreliable computers. ?She may have been robbed of a college education,? Halber writes, ?but her considerable brainpower ? like that of many of the web sleuths I?d encountered ? was completely wasted on her day job.?

Leach used that brain power to help convict a murderer. An Iowa man named Doug ?Moose? DeBruin had, with his girlfriend, murdered his roommate and best friend, Greg May, in order to leave town and sell off the victim?s many valuable Civil War-era antiques. The killers dismembered and scattered the body, embedding May?s head in a bucket of cement and dumping it at a Missouri truck stop. When the bucket was finally discovered, only the skull remained intact, and Missouri police, having no idea who it belonged to, hired a celebrated forensic sculptor to re-create May?s face. It was Leach who, in 2004, spotted a photograph of May on the website of Iowa?s Missing Person Information Clearing House and realized that he looked a lot like the forensic bust she?d seen on yet another missing/unidentified website, the Doe Network. This came in the nick of time; prosecutors in Iowa had evidence of DeBruin?s guilt but were worried they wouldn?t be able to convict without a body.

Making this sort of connection has proven remarkably difficult to fully computerize. ?The Skeleton Crew? is full of tales of misbegotten federal crime databases that don?t contain most of the information they should or that spew out coded reports that only the most practiced adept can decipher. But even when digital resources are properly stocked, networked and interfaced, reuniting an anonymous corpse with its proper name is often a matter of intuitive leaps. With Tent Girl, the size and build of the body convinced the investigators of 1968 that the victim was a teenager. Matthews realized that a towel found with the body was a diaper and that Tent Girl could be a young mother. Barbara Ann Hackmann Taylor was in fact the mother of two, and most likely killed by her carny husband.

?The Skeleton Crew? is about online communities, and no long-lived online community is without its flame wars, with all the attendant feuds, banishments, spinoff groups and coups. For the missing/unidentified researchers ? one of the Internet?s more venerable affinity groups ? the battles result from the usual personality clashes (otherwise known as ?drama?) but also from a methodological schism over how to interact with law enforcement and the families of the lost. Halber divides the two groups into the ?mavericks,? who prefer to proceed swiftly and as they deem fit, and the ?trust builders,? who insist on deliberating as a group before approaching officials or the bereaved. The mavericks complain that the trust builders are too bureaucratic and slow-moving while trust builders want to build credibility in the face of the common police perception that avid tipsters are either time-wasters or simply crazy.

And, of course, plenty of them are. Halber, for obvious reasons, just focuses on the amateur sleuths who are good at their chosen work, but if the advantage of the Skeleton Crew is that anyone can join, that?s also it?s disadvantage. To allow the nation?s overlooked brainpower to flourish, we?re going to have to tolerate some kooks. When, as in the days following the Boston Marathon bombing, the Internet seems to be fostering the worst ? or at least the most foolish ? aspects of human nature, it?s a comfort to remember that sometimes it brings out the best in us as well.

Excerpt from THE SKELETON CREW PROLOGUE

I?m looking around a Cracker Barrel in Georgetown, Kentucky, wondering if I?ll recognize him. The only photos I?ve seen of Wilbur J. Riddle were taken four decades ago, when he stumbled on the corpse wrapped in the carnival tent.

He was forty years old then; with his tousled dark hair and strong jaw, he resembled Joaquin Phoenix with sideburns. Even in black-and-white, Riddle looked tanned, a shadow accentuating the taut plane of his cheek. His short-sleeved shirt unbuttoned jauntily at the neck, he stood slightly apart from three pasty, grim, steely men with buzz cuts, dark suits, and narrow ties. They seemed preoccupied, dealing with a body where a body had no right to be.

Throwing the photographer a sidelong glance and a faint smirk, Riddle alone seemed cocksure and unfazed. In time, he would end up just as invested as the Scott County sheriff and state police, if not more so. He would become the father of sixteen and grandfather of forty and would still be escorting people out to the shoulder of Route 25?X marks the spot?where he found her. Somebody might have been tempted to charge admission.

He?s thought about asking the state of Kentucky to put up a marker along the guardrail: the Tent Girl memorial plaque. She?s a local legend. Parents invoke her?an unidentified murder victim whose face is carved onto her gravestone?as the fear factor that has hurried two generations of children to bed on time.

But she?s more than that.

Tent Girl drew me in. As I delved into the world of the missing and the unidenti?ed, her story would transform the shopworn whodunit into something altogether di?erent?the whowuzit, I?ll call it?in which the identity of the victim, not the culprit, is the conundrum. Her story supplanted the tweedy private eye or world-weary gumshoe of my expectations with a quirky crew of armchair sleuths who frequented the Web?s inner sanctums instead of smoke-?lled cigar bars. Her story was rags to (relative) riches, triumph of the underdog, and revenge of the nerds all rolled into one. Tent Girl, by becoming separated from her name, also invoked a murky psychological morass of death and identity where?judging from my companions? faces whenever I brought it up?most people would rather not go, but that I felt perversely compelled to explore.

The Skeleton Crew by Deborah Halber (Excerpt) by Simon and Schuster