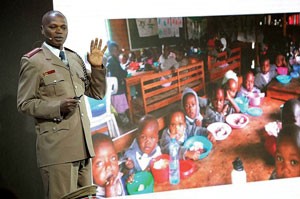 When four machete-wielding thieves invaded a home in Lanet Umoja, Kenya, they were met by an army of crime-fighters?citizen crime-fighters, that is. Chief of Police Francis Kariuki had at his disposal one of the most powerful communication tools known to man. He had Twitter.

Twitter, after all, is credited for bringing down Egyptian President Hosni Mubarak and facilitating student riots in Gezi Park in Istanbul as well as countless clashes in many other geographies. Police, in turn, are learning to use Twitter’s instant messaging-to-the-masses capability to maintain order as well as communicate messages of public safety. That night in Lanet Umoja, just one tweet of a call for help and Kariuki had villagers running to assist and turning on their security lights. The thieves ran away.

Lanet Umoja is a constituency of about 28,000 people in Nakuru County, a somewhat rural area of Kenya. The great majority of people who live there do not have smartphones. Without smartphones, they don’t have Twitter. However, at its core, Twitter works on SMS (short message service) technology. It’s entirely possible to tweet, send someone a direct message and even follow somebody who is on Twitter, without ever having seen Twitter, let alone having an account.

On Twitter, Kariuki has more than 20,000 followers. He estimates that as many as 100,000 people follow him via SMS through Twitter. By sending “f chiefkariuki” to 8988 on a phone, one can follow him and receive his text messages.

According to the Cisco Visual Networking Index, mobile data growth is stronger in Africa and the Middle East than anywhere else in the world and there are currently more mobile devices worldwide than there are people. Kariuki’s innovative use of Twitter and mobile is well-timed and has proven to be immensely successful. Through Twitter, he has recovered stolen cars, found missing children and provided his community members with the ability to work at night safely. They couldn’t do that just two years ago. He’s also called upon neighbors to help douse a fire to save a citizen’s hut.

Kariuki has endless success stories of how he uses a Twitter in the absolute most primitive way conceivable and is saving lives and property as a result.

One time, after a beehive had been harvested for its honey, the bees became agitated. By the following day the nursery school located next door drew the wrath of the angry bees as they attacked hundreds of children. Chief Kariuki was notified and he, in turn, called upon his followers?the children’s parents among them. Chief Kariuki and his followers saved as many as 500 children by carrying them wrapped in blankets out of the swarm of bees. Sadly, one child died.

He also tells the story of one very drunk man who had fallen into a freshly dug pit latrine. When he awoke a couple hours later, at first he thought he was in jail but then he felt the rain on his skin and knew he was in a pit. “So he called his wife and he said ?I’ve fallen into a pit but I don’t know where I am,'” says Kariuki, “and his wife called me and I tweeted. Villagers gathered and we went from pit to pit until we found him a bit later.”

The man reportedly had four broken ribs but was otherwise happy to have been located.

Life hasn’t been the same since 2011, when Kariuki discovered Twitter’s ability to send one text message to many people all at once: “I totally believe that the people are the police and the police are the people. It is hard to have a police officer per every person, therefore it is important for the community to be each brother’s keeper. To enhance neighbor’s watch.”

There are no crime statistics available to prove that Kariuki’s work has reduced crime in Lanet Umoja. But the chief says house break-ins are virtually non-existent these days, and he claims that crime overall is down significantly. One reason for the reduction in crime is that the thieves follow him as well, “and if I alert people on danger they also get the tweet, they abandon what they had stolen and they run away.”

After the 2008 Kenyan Presidential elections, the election results were disputed and there were clashes between tribes. Since then, Kariuki has brought those feuding tribes together with Twitter and explained “those people now respect each other and there is no more tribal animosity.”

Kariuki stresses that he doesn’t use Twitter SMS just to fight crime but also to “share community empowerment and capacity building opportunities and upward mobilization of the community.”

When he learned that bringing people together through Twitter to meet in real life is known as a “tweet-up” in the Twitterverse, he could only laugh, “I didn’t know that!” He added, “I have had many tweet-ups”.