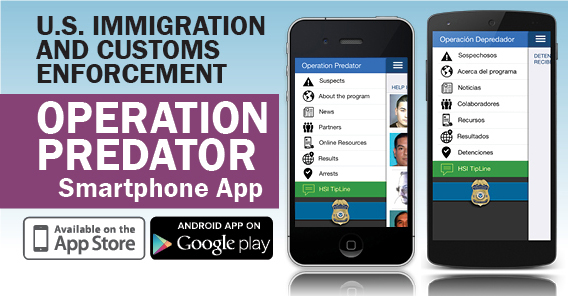 ICE has created a smartphone app designed to seek the public’s help with fugitive and unknown suspect child predators.

Launched in 2013, the app shares photos and details of suspects and asks the public to reply with tips on their whereabouts. It has a list of ICE?s current top 10 most wanted predators and can also push alerts when there?s a more urgent lookout.

The Operation Predator app enables users to receive alerts about wanted predators, to share the information with friends via email and social media tools, and to provide information to HSI by calling or submitting an online tip. Additionally, the app allows users to view news about arrests and prosecutions of child predators and additional resources about ICE and its global partners in the fight against child exploitation.

The iOS version of the app can be downloaded from Apple’s App Store and iTunes; the Android version is available on the Google Play store. 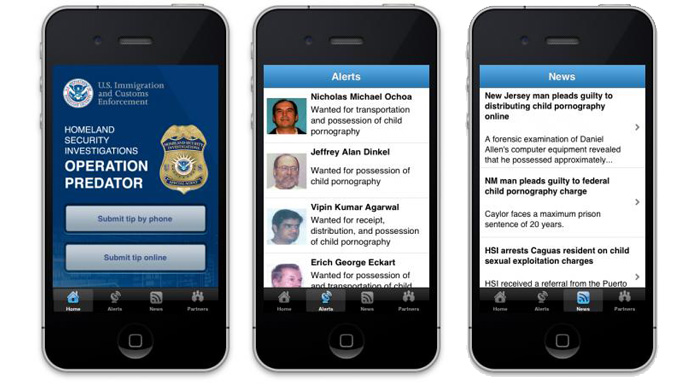 The federal government?s ?Operation Predator? app was credited with helping nab yet another man accused of trafficking in child pornography after a 33-year-old man surrendered in California, just days after federal authorities posted his image and story to Facebook and sent it to the more than 100,000 users who have downloaded the application.

At a time when the online world has made life easier for predators to share pornography or try to lure children to be exploited, U.S. Immigration and Customs Enforcement officials are trying to harness the same power to catch them through the Predator app and other online tools.

?Social media is just so huge now. We?re very pleased with our app,? said Brian Widener, head of the computer forensics unit at ICE?s Cyber Crimes Center, who, in a recent interview, said the app had been responsible for two recent captures, including the 33-year-old man, Jeremiah Malfroid, who turned himself in to police in California in part because of pressure from having been featured on the app.

Mr. Widener said there?s a need for dedicated personal and tools?since the problem of online predators is getting worse, judging by the record-setting years they continue to have for enforcement actions.??Until we start to see that number level off, I would say it?s still a problem, and it?s going to continue to be a problem,? he said.