Friendica (formerly known as Friendika) is open source software that implements a distributed social network. Before it became Friendika, the project started initially as Mistpark, developed by Mike Macgirvin, a software developer who had worked on the original Netscape Navigator project, among others. Friendica has an emphasis on extensive privacy settings and easy server installation. It aims to federate with as many other social networks as possible. In November 2014, the global directory of Friendica users has about 10,000 entries. This is just the number of users who decided to publish their profiles in the public global directory.

Friendica is a relatively new social media platform designed to accommodate posts from various social media websites, including Twitter and Facebook. Friendica?s interface resembles a simplified version of Facebook, with a central page for posting content and subsections for profile information such as contact information and alternative channels of communication. The site also allows accounts to designate ?contacts.? Al-Hayat, for example, currently has five Friendica contacts listed: al-‘Itisaam, along with Russian, French, German, and Albanian versions of their page. 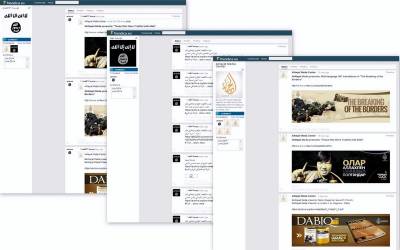 In an unexpected move, media outlets of the Islamic State (IS) have announced that they will be suspending Twitter posts for an unspecified amount of time as the group has moved to a different social media outlet. The Twitter account of al-Battar Media, an Arabic-language group dedicated to promoting IS propaganda, declared in a July 12, 2014 tweet that select IS groups would resort to a European server of the social network Friendica, stating:

Important: Al-?Itisaam Media Foundation and the al-Hayat Center decided to stop publishing on Twitter temporarily and we ask you to disseminate the following links to the official pages on Friendica?

In a follow-up tweet, al-Battar Media provided links to the three other IS-linked media accounts on Friendica, labeled as al-‘Itisaam, al-Hayat Center, and Ajnad. The tweet ended with a hashtag translating to ?#Support_Accounts_of_the_Islamic_State.?

Indeed, three pages can be found on Friendica.eu, a European domain of the relatively new Friendica social media platform. While the new IS accounts were announced on July 12, the profiles of all three linked Friendica pages show that they had been created a month earlier on June 15, 2014.? This time period was likely spent as a test, probing the platform before the announcement.

One is the page of the al-‘Itisaam Foundation, the main IS media distributor that releases messages from the group’s leadership and also produces its own small-scale media. Its Friendica account contains releases and statements by IS leadership, including the announcement of the Caliphate on June 29 and the Friday Sermon by the new Caliph, Abu Bakr al-Baghadadi. Much of the recent content on the page, however, displays content from al-Hayat along with various audio files of speeches and religious recitations.

Al-Hayat, the IS media group emphasizing recruitment of Westerners, provides media in English and other Western languages, including French, German, and Russian. Al-Hayat Center?s Friendica page primarily features propaganda of the like: videos of Westerners in Syria, English and French magazines, IS leadership messages translated to several European languages, Islamic readings, and more?all produced and aimed for Western recruitment.

Such posts by al-Hayat include the July 11-released video featuring a deceased Canadian fighter, identified as ?Abu Muslim,? urging others to come to Syria with their families and participate in jihad. Other videos include a thirteen minute video entitled, ?There is No Life Without Jihad,? which was released on June 19, 2014 and features five fighters identified as Australian and British nationals inciting Muslims to participate in jihad in Syria. Various additional videos feature Western IS jihadists, including the fourth episode in its ?Mujatweets? video series showing a German fighter, and episode five, featuring Bosnian children praising IS. The account also features about two dozen of the group’s releases in various Western languages, including magazines discussing IS operations, the Caliphate declaration, calls to join the group, and jihadi Anasheed (Islamic chantings).

The third group mentioned, Ajnad Foundation, is another official IS media page, primarily tweeting religious and Qur’anic recitations. Ajnad Media?s Arabic-languagepostings on Friendica are similar to those clips of Al-Hayat and al-‘Itisaam.

While IS?s other accounts remain on Twitter, the group?s outreach expansion into Friendica begs yet another question: What does IS have to gain from Friendica? Or, perhaps more pressing, what exactly is Friendica? 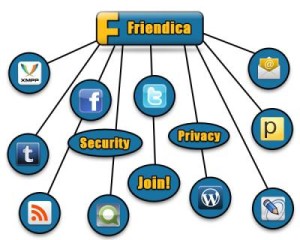 Yet, it is not clear why IS chose Friendica. Expanding its network and recruitment to Europe could be one reason. However, while many IS supporters may very well follow the group to the new social network, it would not actually constitute any gain in audience. Without a substantial jihadist presence on Friendica, it is not clear how IS expects to harvest new supporters on this lesser-known network.

Even more baffling is why IS didn’t announce the move to Friendica officially. After all, the group still maintains many accounts on Twitter and jihadi forums, all channels the group has utilized before. For instance, on October 15, 2013, the group published a statement announcing its main media outlets to be the AQ primary source jihadi forum, Shumukh al-Islam, and Twitter.

Though IS didn’t announce this move officially, it is clear that Friendica is being used as a primary source of communication. Since July 11, 2014, all al-‘Itisaam, al-Hayat and Ajnad releases were first posted on the group’s Friendica.eu pages. The video of the Canadian fighter, Abu Muslim, was also first published on the al-Hayat Friendica page and only later disseminated on Twitter. The same is with the group?s recentvideo release of a Kazakh fighter calling for his fellow countrymen to join jihad. It may be that IS?s informal announcement through al-Battar is just a way to force attention to these new pages. By announcing a hiatus of unspecified duration, IS could be trying to shift its followers into viewing these new Friendica pages as there might be some foreseeable benefits in the platform. Particularly, Friendica could provide a potentially stable hub to manage and designate a constantly alternating array of usernames?not to mention helping to eliminate much of the misleading noise of impostor accounts.

However, some aspects of the situation aren?t as easy to rationalize. Though Friendica operates as a decentralized network of servers, IS?s new profiles are held under a European domain (.eu). And, if these pages are to fall subject to European laws?ones that are far less accommodating to free speech than that of the U.S. and its housed social media companies like Twitter?it is hard to believe that these accounts will survive for a long time.

Despite the new announcement, one should not be mistaken; Twitter remains a valuable and irreplaceable tool for IS?s recruitment and propaganda dissemination. Whatever the reasons are for the group to temporary migrate some of their accounts to Friendica, it is not an abandonment of Twitter. After all, the announcement declared that they ?decided to stop publishing on Twitter temporarily,? and notpermanently.