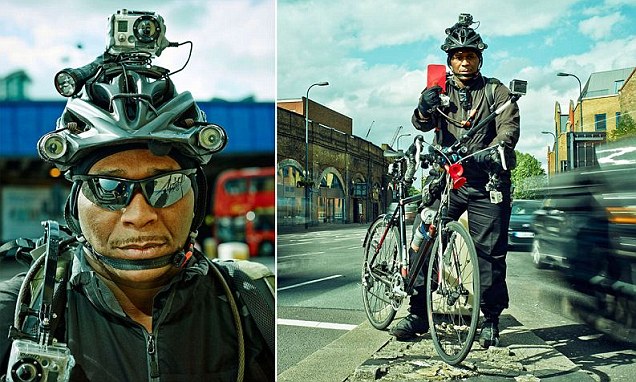 Foul!” yells Lewis Dediare from his bicycle before brandishing a red card in the face of a dumbfounded delivery driver.

The scene is not a football pitch, rather the middle of a London street, where Dediare, alias the “Traffic Droid”, is busy enforcing the law.

The 49-year-old is one of dozens of British cyclists who have found a new raison d’etre: to travel the land recording reckless drivers with helmet-mounted cameras and passing the evidence on to police.

The authorities were at first wary of the carriageway vigilantes, but every case is now treated on its merits.

Equipped with Klaxon horns and a “Selfie cam” comprising torches and no less than eight cameras, Dediare is a one-man sound and light show, as likely to amuse as to intimidate.

“Some people say I look like a flying saucer,” he joked.

In addition to his red card, Dediare carries a tape measure to make sure motorists keep the regulated one-metre (three feet) ?distance from cyclists.

The spur for action was a 2009 bicycle accident in which he nearly died.

Every day since getting back on his bike, he has documented his two-hour ride to his job in telecommunications, filming “idiots” before exposing them on YouTube.

Whether it is cutting people up, jumping red lights or using mobile phones, there is nothing that escapes his gaze.

“I’m scanning the road all the time, it’s like a video game,” he said.

Dediare reports an average of four drivers to the police every day. Some will be fined and even lose their licence.

?’Too many cyclists have died’

“How about cyclists then? They are far worse. They don’t look at the traffic lights,” asked a disgruntled truck driver, while casting a wary eye over the “Droid”.

Others accuse him of being a “snitch”, an informer in a country already riddled with surveillance cameras.

“I’ve been attacked a few times,” admitted Dediare, but insisted he was just being a “concerned citizen”.

About 15 cyclists are killed in London each year on average, a toll that also spurred cyclist Dave Sherry to start filming his bike trips into the capital.

“Too many cyclists have died,” said Sherry, a 37-year-old bus driver. “It’s a jungle out there.”

Both Sherry and Dediare complain that budget cuts mean there are no longer enough police officers to protect cyclists. There are now 3,600 fewer officers in London than three years ago, according to Metropolitan Police figures.

Sherry claims to have notched up 60 convictions in the past two years. And last year, one of his videos even led to the dismissal of a fellow bus driver for texting while driving.

He admits to some resentment among his co-workers, but says: “I don’t care what people think. If I can save one cyclist’s life, that’s a good thing in my book.”

The crusaders often hand their evidence to Police Witness, a private company that offers to review the footage and pass it to the police for free, as long as cameras are purchased through them.

“We can sometimes receive tens, if not hundreds, of incidents each week,” explained chief executive Matt Stockdale, adding that videos are only passed on where “we know the police can and will act”.

“Over the past 18 months, hundreds of motorists have been held to account, facing a host of remedies, from fines and points, through to drivers banned,” he said.

“All possible without a police officer in sight.”

The Association of Chief Police Officers, which helps develop guidance for police forces, said it encourages members of the public to bring any evidence of an offence to the authorities.

“With motoring offences, videos filmed from dashboard mounted cameras or head cams are admissible as evidence, and assuming that the quality is good and the evidence can be corroborated the police will record, report and consider the circumstances of each case on its merits,” a spokesman said.