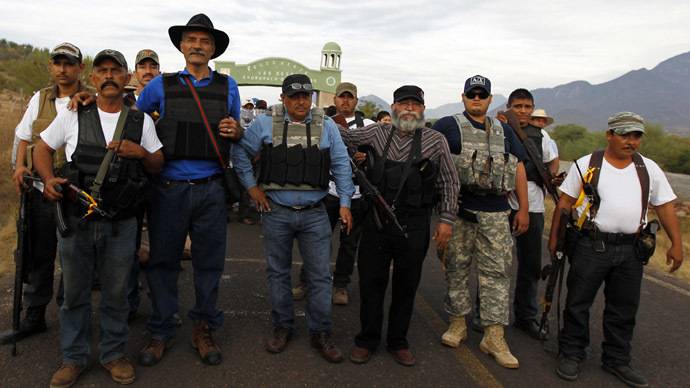 It?s midday in Michoac?n, and the camera zooms in on a dozen armed vigilantes as they capture two murderous?cartel?members, Caballo and Chanenque. The pair had made a habit of killing and dismembering anyone who crossed them, but now the tables have turned. Apprehended around the back of a liquor store, they’re kicked, beaten, handcuffed and insulted, all in the name of their victims.

We don’t learn Caballo and Chanenque?s ultimate fate, as the director cuts away before vigilante leader Jos? Manuel Mireles can order it. But, given the vengeful nature of Mexico’s drugs war, one can hazard a pretty decent guess. The scene was caught by US filmmaker Matthew Heineman in his new documentary,?Cartel?Land. It tells the story of Mireles, a small-town doctor in Western Mexico who grew sick and tired of narco-cartels?terrorising communities across his homeland.

His response was remarkable. Rather than accept the grim reality or flee to another country, he decided to take the law into his own hands and launch a self-defence militia (called the “Autodefensas”), prepared to stand up to the all-powerful local?cartel, the Knights Templar, whatever the consequences. “We’ve reached the gates of Hell,” he tells a crowd in the square of his hometown, Tepalcatepec. “Now it’s time to defend ourselves”.

Mireles granted Heineman pretty much unlimited access, the latter employing a lightweight camera and run-and-gun style to capture the Autodefensas on their missions. The film begins, though, with a scene encapsulating the savagery they’re up against: the burial of a group of young children, who’d had their feet bound and heads smashed against rocks after their father, a local farmer, failed to pay the weekly extortion fee demanded of businesses across the state.

Illegal drug sales to the US alone?are worth around $30 billion a year, and it’s a market Mexico’s?cartels?will stop at little to protect. (Some 70,000 people died in drug-related violence between 2006 and 2013.) Yet, the Knights Templar, in common with cartels elsewhere in Mexico, have diversified beyond the production and distribution of drugs into other areas of commerce, hijacking Michoac?n?s lucrative trade in both lime and avocado, for instance.

A stirring speaker who attacked the impotence, and in many cases corruption, of local government and the police in the face of narco oppression,?Mireles struck a chord. He raised enough supporters to grab de facto control not just of Tepalcatepec but of 28 other municipalities in Michoac?n too, setting up citizen councils in each. This amounted to about a third of one of the most hotly contested states in the country (Michoac?n boasts Mexico’s largest port, L?zaro C?rdenas, which enables control over drug routes along the Pacific.)

A silver fox in his mid-fifties, the charismatic Mireles appeared on the covers of magazines and on national news bulletins,and was feted like a celebrity on the streets. His vigilante model soon transferred to Mexico’s half-a-dozen other “problem” states too, and the impossible suddenly seemed possible: the little man overcoming the lawless conglomerates. David was on the point of toppling Goliath.

“Dr Mireles is an amazing guy,” his lawyer Javier Livas tells me, over the phone from Michoac?n. “He went from town to town inspiring citizen after citizen, saying ‘it doesn?t have to be this way. You don’t have to accept the killings and kidnappings and extortion, you can reclaim your towns if you want to.? And they did.?

At first, says Livas, the central?government was favourable towards Mireles. By chasing down the?cartels, ?essentially he was doing its job for them?.

?But then, as Autodefensas started springing up all over, I think they realised ‘this is getting out of control. If we’re not careful, whole pockets of the country are going to be overrun by vigilantes.’ So they acted.?

Mexican president Enrique Pe?a Neto sent his ally Alfredo Castillo to Michoac?n as security czar, to steady the ship. The latter demanded the Autodefensas give up their arms and?join a federal force called the Rural Defence Corps instead. A mistrustful Mireles was steadfast in his opposition to this, but by now he?d become a victim of his own success: the vigilante movement had grown so big???to 10,000 in number, by some estimates???that?rivals emerged who challenged his say.

To make matters worse, in January 2014 he was involved in a mysterious plane crash, in which the pilot died. The official cause was pilot error, but given Mireles?s number of opponents, doubts persist. In?Cartel?Land’s second half we witness his increasing powerlessness as he tries to recover from multiple injuries (broken ribs, fractured vertebrae, dislocated jaw) while others make pacts with the government behind his back.

Certain commentators, including Anabel Hern?ndez in her book Narcoland, have suggested that collusion between the drug?cartels?and politicians goes to the very top of the Mexican state. Livas, however, won’t go that far. “I think the federal government simply wanted to regain control of the situation, and that meant averting any possible popular revolution ??whether whipped up by Mireles’s rhetoric or as a result of some narco killing him and the people declaring him a martyr.”

As revealed at the film?s close,?Mireles was arrested in June 2014?for the unlawful possession of firearms. Since then, he has been refused bail and removed to a prison 1,000 miles from home. His trial is underway but looks like being a long, drawn-out affair. Amongst other things, Livas complains of the failure of police and other witnesses to turn up, and of failed Skype calls to Mireles’s cell setting things back by weeks at a time. “It’s incredibly frustrating”, he says.

All the while, vigilante groups across Mexico have grown fragmented and started fighting amongst themselves rather than against their nominal enemy, the?cartels. In Michoac?n?s neighbouring state, Guerrero, two self-defence groups have even begun a bloody turf war, indulging in same dark practices as the?cartels they’d emerged to prevent ??much as Colombia’s paramilitaries did, when that country faced its own drug wars in the 1980s and 1990s.

The infighting in Michoac?n has also opened the door for an upstart?cartel, the Jalisco New Generation, to ruthlessly seize the initiative there. The escape from a supposedly high-security prison in July of ?ber drug-lord, Joaquin ?El Chapo? Guzman, is symptomatic of the unrelenting struggle nationwide.

Livas, however, remains positive. “Mr Mireles showed what one man achieve,” he says. “He’s an inspiration to all of us as we seek a way out of this war. Surrender isn’t the only option.”

A prominent figure in the tangled vigilante movement in western Mexico is under arrest and facing drugs and weapons charges, which has become the latest development to cast uncertainty over the troubled agricultural and mining state of Michoacan.

Dr. Jose Manuel Mireles, a lanky gray-haired physician who came to prominence earlier this year as the symbolic face of the autodefensa movement in Michoacan, was arrested on Friday during a heavy federal and military operation, along with 82 other dissident militia members in a small community in the region known as Tierra Caliente, or Hot Land.

Mireles had previously refused to go along with a plan by Mexico?s government that required all citizen militias in the state to lay down their arms by May 10 and fold their efforts into a little-known agency known as the Rural Forces. He frequently called the government corrupt and claimed authorities were colluding with Michoacan?s most powerful cartel, the Knights Templar.

Mireles said he wouldn?t disband the vigilantes he had helped organize until Mexico?s government met its end of an earlier bargain with the groups, which called for authorities to locate and capture the Knights Templar leader known as ?La Tuta.? Servando ?La Tuta? G?mez remains at large.

In May, the government successfully convinced other leaders and their militias to join the Rural Forces, a push aimed at diffusing the widening influence of the grassrootsautodefensa groups that proliferated in response to the Knights? unchecked use of extortion and kidnapping in towns and cities across the state.

Alfredo Castillo, the federal-level special commissioner in charge of bringing order to Michoacan, said during a press conference on Monday that Mireles and three bodyguards were found with 14 firearms, as well as ammunition, marijuana, cocaine, and 30,000 pesos in cash, or about $2,300.

?With these actions, the state institutions and the federal government are making the law count ? with the only goal being the return of peace and tranquility to all the people of Michoacan,? Castillo told reporters.

Mireles was transported to a prison in the state of Sonora, north of Michoacan, and awaits an indictment, officials said.

?The doctor was jailed because he didn?t fall in line behind the commissioner,? L?pez Obrador said in the community of Nueva Italia.

Nonetheless, Mireles’s record isn’t exactly clean. In 1988, he was arrested by federal authorities after being caught with 86 kilos of marijuana, the Mexican daily Excelsior reported in January. He served three years and eight months in prison for the related charges.

Mireles?s lawyer, Tal?a V?zquez, claimed in an interview with VICE News this week that the government must have planted the drugs on Mireles in order to detain him. She also alleged that the doctor was ?tortured? by authorities and kept isolated for 24 hours before being permitted to meet with her.

?Doctor Mireles was detained in an irregular manner for creating discomfort for the government and because they want to police a social problem with force,? V?zquez said. ?Since there is a grave conflict in Michoacan and since they are unable to arrest theTemplarios, it?s better to arrest Mireles.?

She added: ?The autodefensas are not the root of the problem, they are the solution that the people gave to the problem.?

Castillo on Monday denied that Mireles had been tortured, but did not address the other claims against the doctor?s arrest. He also said the investigation of Mireles is ongoing and that other charges could follow.

The operation that led to Mireles?s arrest was unusual because it involved all the major Mexican security forces, including the army, the navy, the federal police, and state-level police and prosecutors. The doctor was captured as he attempted to organize a freshautodefensa group in La Mira, which lies on a highway to the Pacific port of L?zaro C?rdenas that is strategic for illegal mining and other criminal interests, his lawyer said, calling the coincidence suspicious.

?La Mira is strategic for the Templarios,? V?zquez said. ?It?s a very small community but it is an obligatory stop from the mountains to the port [L?zaro C?rdenas]. Drugs, guns, and minerals pass through there, and it is a position that belongs to La Tuta.?

The Mireles arrest comes nearly two weeks after the resignation of Michoacan?s governor, Fausto Vallejo. Vallejo is reportedly battling a serious illness, which had forced him to designate most of his duties to a substitute. A few days before Vallejo announced his resignation, photos emerged that allegedly depict his son, Rodrigo Vallejo Mora, in a meeting with ?La Tuta.?

Vallejo has been dogged by allegations of links to organized crime almost since the start of his term in office in 2012.

Mexico?s federal government says that so far 5,000 former militia members have registered for the Rural Forces, with more than 800 of them already active.

But the Rural Forces have not avoided their own problems. Claims of corruption against some recently integrated members are already casting doubt on the ability of the Rural Forces to help bring order to the state of Michoacan. A town hall meeting with the Rural Forces in the community of Aguililla descended into a brawl and then gunfire in mid-June,leaving one dead.