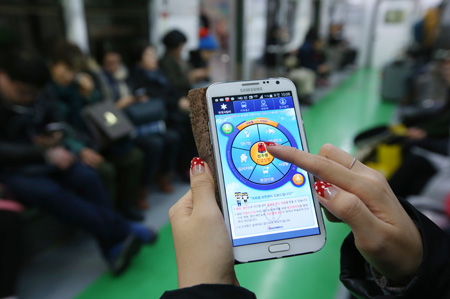 The Seoul Metropolitan Government (SMG) plans to launch a smartphone app on Jan. 1 through which a sexual abuse victim on the subway train can ask for help from subway staff, in an effort to enhance the safety of female passengers.

According to SMG, the app will also enable a third person, who sees sexual abuse happening, to ask for help.

“Usually, it takes 20-30 minutes for the subway police authorities to arrive at the scene. And by that time, the suspects are often gone. This app would solve that problem by instantly notifying the subway police,” said Jeong Soo-min from SMG. The subway police are in charge of investigating crimes that happen inside subway stations and subway trains.

“Almost 6.6 million people use the subway every day in Seoul. For the city government, it’s important to make sure that the subway is a safe experience,” said Jeong.

The application will work only on subway lines No. 1 through No. 4. These are where most sexual abuse cases are reported. The city also said it would gradually expand the operation to cover all subway lines.

According to Seoul Subway Police, sexual abuse is the most common type of violence. Seoul Station had the biggest number of cases reported last year, followed by Shindorim Station and Sadang Station.

The city will also install more closed-circuit televisions (CCTV) inside subway trains. Currently, 1,876 CCTVs are installed, and the number is projected to reach 3,116 by 2022, said the city.

The city will also increase the number of “safe zones,” a designated spot on the subway platform with a concentrated number of CCTVs watching passengers.